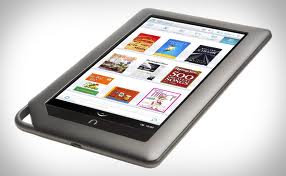 I received a Nook Color (NC) for Christmas this year. I promptly rooted it to make it a viable Android tablet. I have spent enough time with it to give a good review.

I read the live blog when the NC came out and was very disappointed to read how locked down it was. The allure of making money on an app store is just too much. I had really hoped that Barnes and Noble had the foresight to position the NC as cheaper Android based tablet because there is a market for this type of product.

To get out of the walled garden one must root their phone or tablet. This is becoming an unfortunate necessity for most mobile and tablet devices especially iOS based ones. Rooting the NC did take some technical expertise and time and you can find the instructions here. I suspect this will change dramatically as time goes by as most popular phones have one click root programs and the current NC root procedure is manual and difficult. That said, rooting the NC is the only way to use it and well worth the effort.

Here are my main annoyances with the Nook:

The NC itself is just the right size and weight and doesn’t hurt your wrist while reading. It is half the weight of an iPad which I considered to be about twice as heavy as it should be for reading. I haven’t tested the NC’s video playback abilities yet, but some have complained about sluggish performance on non-rooted NCs. The built-in browser is poorly done and does not support pinches for zooming. I recommend installing Opera mobile as yourÂ defaultÂ browser to get around this poor browser app. TheÂ batteryÂ life is good for reading and apps and you don’t find yourself charging it all of the time. Â I am writing this post with the WordPress app on my NC and the keyboard is nice.

I recommend a rooted NC to anyone looking for an Android powered tablet who doesn’t want to pay for a Galaxy Tab ($500-600 depending on subsidy). I also recommend it to anyone waiting for the next generation of Android tablets and Honeycomb (Android 3.0) but needs something now. You can pay less and get another one later. Â Comparing the NC to the iPad is quite difficult because of the price difference (cheapest iPad is $499 and NC is $250). Â You will have to root both of them to bypass their walled gardens. Â For me it comes down to 2 issues, the weight/size and price difference. Â If you want a bigger screen and don’t mind the weight and price of an iPad, buy it. Â If you want a cheaper, lighter reader, go with the Nook.

I found a good post talking about some of the user’s tips. Â From his post, I found a workaround to one of my annoyances, install Launcher Pro from the Android Market. Â It will automatically refresh installed apps and generally work like a normal home screen.

I have overclocked my NC using these instructions. Â It leads to a very zippy NC. Â The performance boost is impressive and you even increase your battery life.

Here is a video and instructions for putting Android 3.0 on your Nook Color.